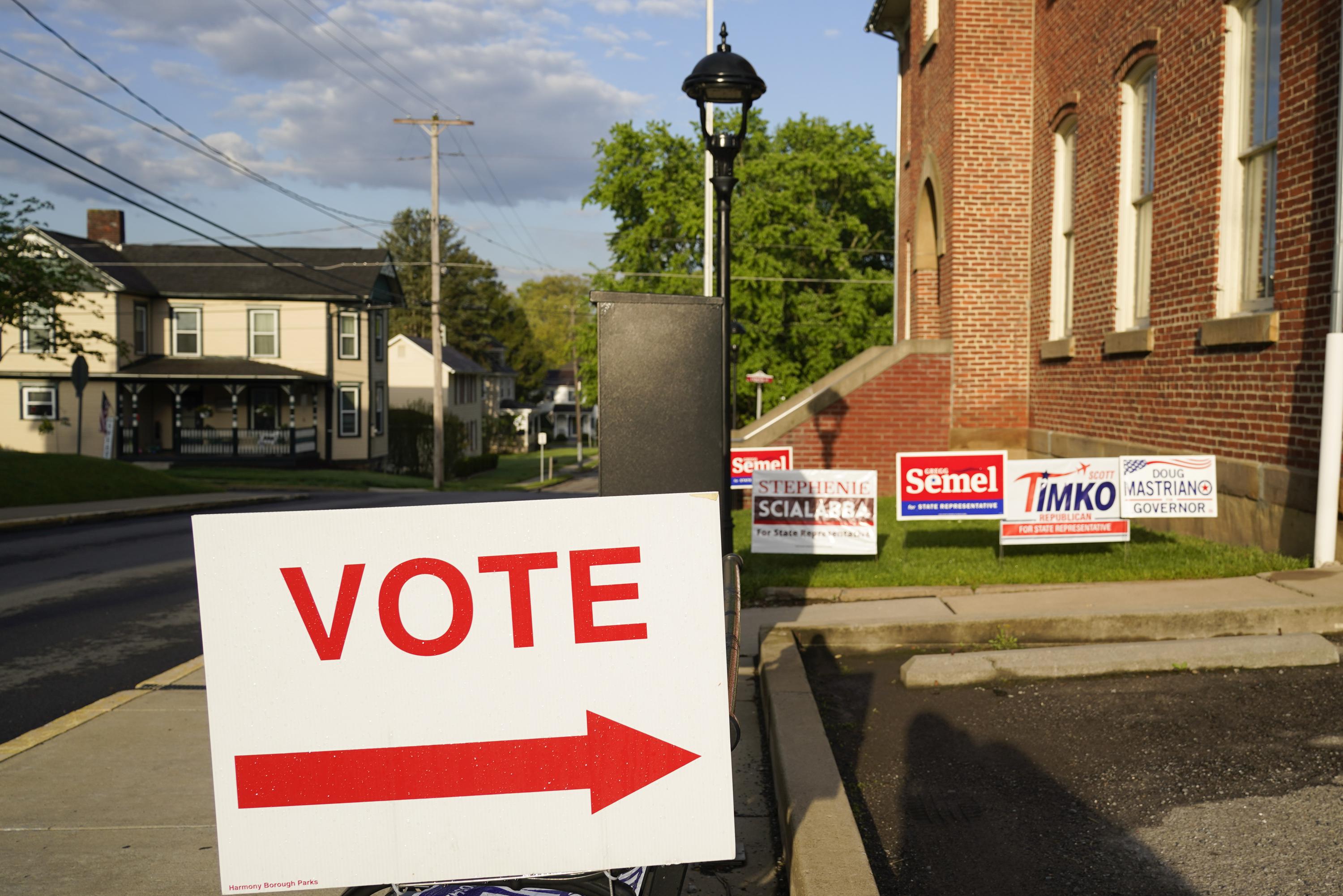 HARRISBURG, Pa. (AP) — Former President Donald Trump’s winning streak in US Senate primaries is on the line Tuesday as voters in five states cast their ballots in midterm elections.

Trump made bold endorsements in backing celebrity heart surgeon Mehmet Oz in Pennsylvania and US Rep. Ted Budd in North Carolina. The once little-known Budd is now in a strong position to win the Republican nomination, but Oz is locked in a tight primary against a former hedge fund CEO and a community activist. The primaries follow a resounding win in Ohio’s May 3 contest by Trump’s Senate candidate, JD Vance.

On the Democratic side, Pennsylvania Senate candidate John Fetterman revealed over the weekend that he had suffered a stroke but was on his way to a “full recovery.”

Pennsylvania, Oregon and Idaho are holding primaries for governor on Tuesday. In Idaho, Republican Brad Little is fighting back a challenge from his lieutenant governor, a Trump-backed conservative who issued executive orders banning mask mandates during the height of the pandemic when Little was out of state on business.

In Congress, US Rep. Madison Cawthorn is trying to survive a Republican primary in North Carolina after a turbulent first term in office.

What to watch in Tuesday’s primaries in Pennsylvania, North Carolina, Kentucky, Idaho and Oregon:

The race for retiring Republican US Sen. Pat Toomey’s seat has been dominated by a huge primary field that has been particularly contested on the GOP side.

But on Sunday, the focus was on the Democrats as Fetterman announced he was recovering from a stroke. The 52-year-old said he went to the hospital on Friday after not feeling well and would remain for a while for observation. He vowed to press forward despite the health setback, saying, “Our campaign isn’t slowing down one bit, and we are still on track to win this primary on Tuesday.”

Fetterman has led in polls and fundraising in a four-person field that includes US Rep. Conor Lamb and state Rep. Malcolm Kenyatta.

For Republicans, the race looked for much of the campaign like a two-man contest between the Trump-endorsed Ozbest known as the host of daytime TV’s “The Dr. Oz Show, and former hedge fund CEO David McCormick.

In the governor’s racesome Republicans are wringing their hands over the prospect that a far-right candidate, state Sen. Doug Mastriano, could emerge as the winner in the crowded field. They fear Mastriano, who has promoted Trump’s lies of widespread election fraud in the 2020 election, is unelectable in November and likely to squander an opportunity to replace Democratic Gov. Tom Wolf, who is prevented by term limit laws from running again.

On the Democratic side, the state’s two-term attorney general, Josh Shapiro, is unchallenged in his gubernatorial bid.

Trump is trying to sway races for US Senate and House in a state he won twice, but narrowly.

Trump endorsed Budd for the Senate seat being vacated by retiring Republican Richard Burr, surprising many at last year’s state GOP convention. Budd’s top competitors in the 11-way primary are former US Rep. Mark Walker, who had actively sought Trump’s support, and formed Gov. Pat McCrory, who is considered a moderate in the race but is best known nationally for signing a “bathroom bill” targeting transgender people in 2016 that cost the state billions.

On the Democratic side, Cheri Beasley, the former chief justice of the North Carolina Supreme Court, has appeared to clear her 11-person field of significant rivals. She would be North Carolina’s first Black US senator if she wins in November.

Unforced political and personal errors by Cawthorn — a speaker at the “Stop the Steal” rally before the Jan. 6 insurrection at the US Capitol — have made him vulnerable in an eight-candidate GOP primary. US Sen. Thom Tillis has endorsed state legislator Chuck Edwards in the race.

Trump, in a post on his social media site Truth Social overnight Monday, urged voters to give Cawthorn “a second chance,” acknowledging the candidate had recently made some “foolish mistakes.”

In two Democratic-leaning districts, Democrats are holding robust primaries for the nominations to succeed the retiring Rep. David Price in the 4th District and Rep. GK Butterfield in the 1st District. Forming “American Idol” star Clay Aiken is among the Democratic candidates running for Price’s seat.

Tuesday’s primary may not be the final word for would-be nominees: First-place candidates must get more than 30% of the vote to avoid a July 26 runoff.

US Rep. John Yarmuththe chair of the House Budget Committee and the only Democrat in Kentucky’s congressional delegation, is retiring, opening up his seat for the first time in 16 years.

On the Democratic side, state Sen. Morgan McGarvey and state Rep. Attica Scott are playing up their progressive credentials in the Louisville-area 3rd District. Despite their underdog status, several Republicans are also running for the seat, which Yarmuth won in 2006 by ousting a veteran GOP congresswoman.

The Louisville mayor’s race is also getting outsize interest this year after someone fired on one of the candidates while he was in his campaign office. Democrat Craig Greenberg escaped with a bullet hole in his sweater in the Feb. 14 shooting, and a local social justice activist was charged with attempted murder.

Greenberg is one of eight candidates running in the Democratic primary. A Republican hasn’t held the mayor’s office in Kentucky’s largest city in several decades.

In liberal Oregon, the primary for governor is shaping up as a test between the moderate and progressive wings of the Democratic Party at a time of widespread frustration in the state over the COVID-19 pandemic, the homeless crisis, a lack of affordable housing and growing gun violence.

The two leading Democratic candidates are Tina Koteka staunch liberal and former speaker of the state House, versus Tobias Read, the state treasurer who has positioned himself as a moderate.

In the Democratic-leaning 5th Congressional District, US Rep. Kurt Schrader — a moderate endorsed by President Joe Biden — is trying to fight off a primary challenge from progressive Jamie McLeod-Skinner.

The state’s new 6th District has drawn national buzz as one of the most expensive Democratic congressional primaries this year. It has attracted 16 candidates, including Democratic newcomer Carrick Flynn, who is backed by a cryptocurrency kingpin.

In the Democratic-leaning 4th District, eight Democrats are vying for the nomination to replace US Rep. Peter DeFazio, who is retiring after 35 years in office.

Little, the Republican governor, is trying to survive a primary challenge from his lieutenant governor, Janice McGeachina far-right conservative who has been backed by Trump.

The relationship between Little and McGeachin has been fraught. On two occasions when Little went out of state last year, McGeachin claimed to be in charge and issued executive orders to block COVID-19 mandates. Little, who had never tried to implement any pandemic-related mandates, rescinded both orders when he returned.

In February, McGeachin delivered a taped speech at a white nationalist gathering in Florida. She later said that she was taking an opportunity to speak about Trump’s “America First” agenda and that the “media wants us to play a guilt-by-association game.”

The establishment and far-right factions of the Republican Party are also vying for control in other races in the state.

In the attorney general’s racefive-term incumbent Lawrence Wasden is facing a primary challenge from former US Rep. Raul Labrador, a tea party favourite. In the secretary of state’s race, establishment-backed Phil McGrane is going up against state Sen. Mary Souza and far-right state Rep. Dorothy Moon, both of whom have spread the lie that Trump won the 2020 election.