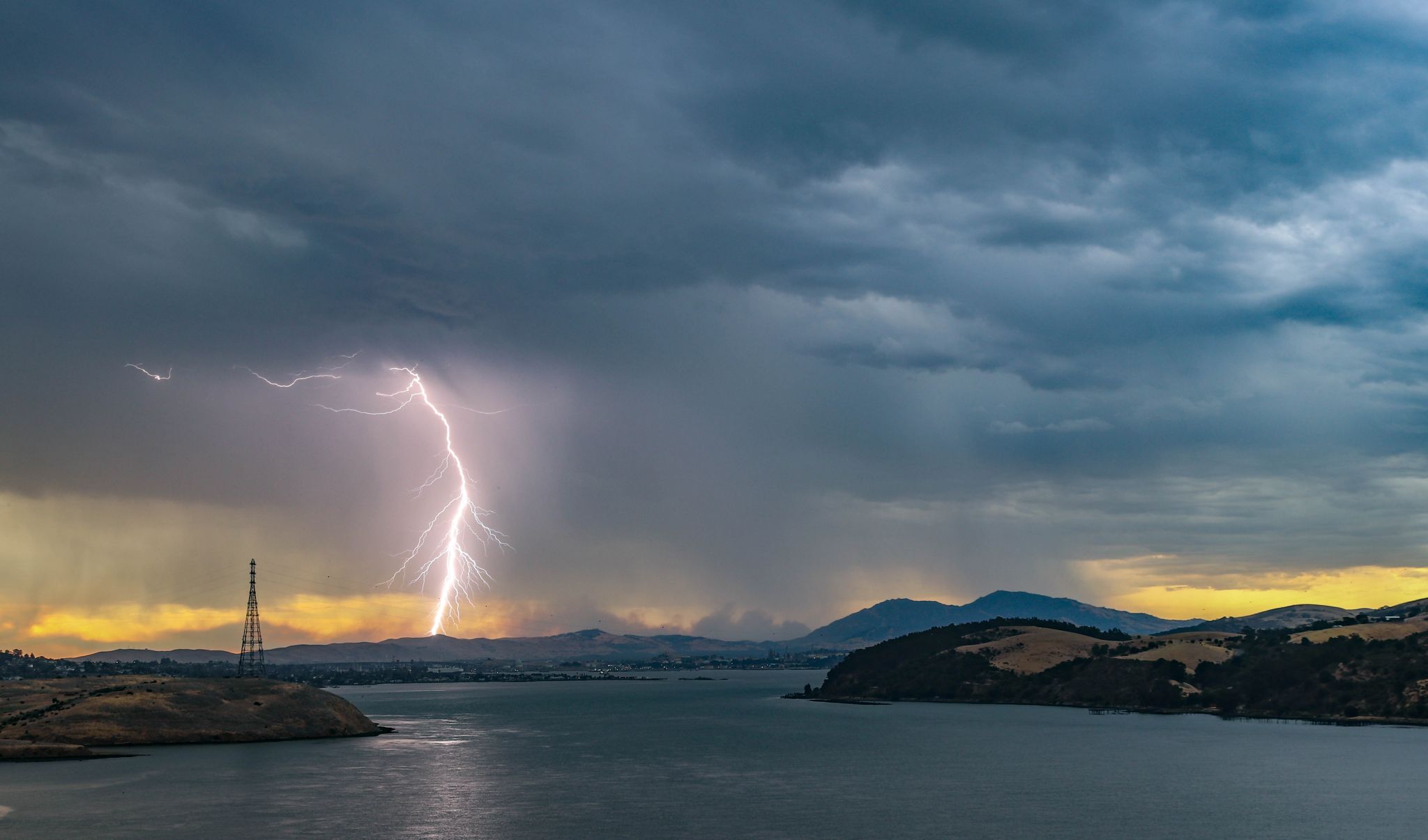 LATEST June 22, 8:35 pm Most of the weather action remained just south of the Bay Area on Wednesday evening with thunderstorms over Monterey and San Benito counties, but the National Weather Service reported sprinkles in Pleasanton at 8:25 pm

“Quite an impressive mesoscale blow-up of strong thunderstorms in Monterey and San Benito Counties!” UCLA climate scientist Daniel Swain wrote on Twitter. “Lots of lightning with these, but also some localized heavy downpours. There have been strikes outside of the rain cores, though, so fire starts still possible.”

Swain added, “Would not be entirely surprised if some outflow boundaries emanating from this impressive thunderstorm cluster triggered some secondary storms to the north and east later this evening (which could include southern SF Bay Area or Central Valley).”

“This could hold up over next hour to impact SF #BayArea,” Ranieri wrote.

Just south of the Bay Area, thunderstorms brought some rain and lightning to Monterey and San Benito counties.

Weather service forecaster Sara McCorkle said just before 5:30 pm that the thunderstorm activity is likely to stay south of the Bay Area.

“There’s still maybe a slight chance for the Bay Area, but it’s looking like Monterey and San Benito counties will see the most impacts,” McCorkle said.

NBC meteorologist Jeff Ranieri said on Twitter that at least 26 lightning strikes were detected just south of the Bay Area.

The clouds arrived in the Bay Area on the day after a major warm-up, and the region felt muggy with the combination of moisture and heat.

“The clouds above us right now are from what was a tropical storm which is why it’s starting to feel humid. Expect a muggy morning tomorrow,” ABC meteorologist Drew Tuma wrote on Twitter.

June 22, 9:50 am A heat wave in California was broken on Wednesday as monsoonal moisture from the Gulf of Mexico pushed into Southern California early Wednesday, delivering scattered thunderstorms and lightning across the region.

The National Weather Service reported a line of showers and thunderstorms over Ventura County and Los Angeles County just after 8:30 am “Expect off and on again lightning, small hail, and heavy rain through the day. Plan for extra time on the roads today ,” the weather service’s LA office said on Twitter.

The surge was pushing into the San Joaquin Valley and southern Sacramento Valley and will impact the San Francisco Bay Area this afternoon. As the monsoonal moisture moves into the area, clouds are expected to arrive from the east and there’s a slight chance for thunderstorms, hail, showers and dry lightning through Thursday.

Both low and high clouds are advancing northward this morning!

The high clouds are from monsoonal moisture and high based thunderstorms to the east.

The low clouds are coastal fog from a southerly surge of marine stratus.

A monsoon refers to a seasonal reversal of winds. The summer monsoon is associated with an increase in thunderstorm activity; in North America, winds pull moisture from the Pacific Ocean and the Gulf of Mexico and transport it into the Southwest US

The summer monsoon is a typical weather pattern that is most pronounced in the interior Southwest states of Arizona and New Mexico. Sometimes the moisture pushes northward into California.

In most situations, lightning is more common in the Sierra Nevada than along the coast due to the mountains’ lack of a marine layer and its topography. In the mountains, the air mass is forced to lift, intensifying the thunderstorms.

Drew Peterson, a forecaster with the weather service’s Monterey office, said that as the moisture approaches the Bay Area, a low-pressure system off the coast of Big Sur will drive it in a counterclockwise direction.

As the moisture moves east from the Sacramento Valley into the greater Bay Area, it will lose strength, but there’s still a chance for thunderstorms, bursts of heavy rain and hail and dry lightning, starting at 2 pm or 3 pm with the peak around 4 pm to 8 pm There’s a possibility of another round on Thursday.

“I’d say for the most part, we’re looking at scattered high-based showers with potentially an isolated thunderstorm or two,” Peterson said. “The most likely areas for this are pretty much from Hollister northward to about Benicia, including all of Santa Clara County, Contra Costa County, Alameda County, Solano County and Napa County, with the highest possibility on the eastern side of those counties.”

Peterson said there’s less likelihood for thunderstorms in Marin and San Francisco, but they are still possible.

While fire starts are a concern, Peterson said the weather service didn’t issue a red flag warning for the region.

“The risk is near critical, just below needing to put out a red flag warning, but we’re missing some of the key ingredients such as winds and widespread dry lightning that make the fire risk severe,” Peterson said.