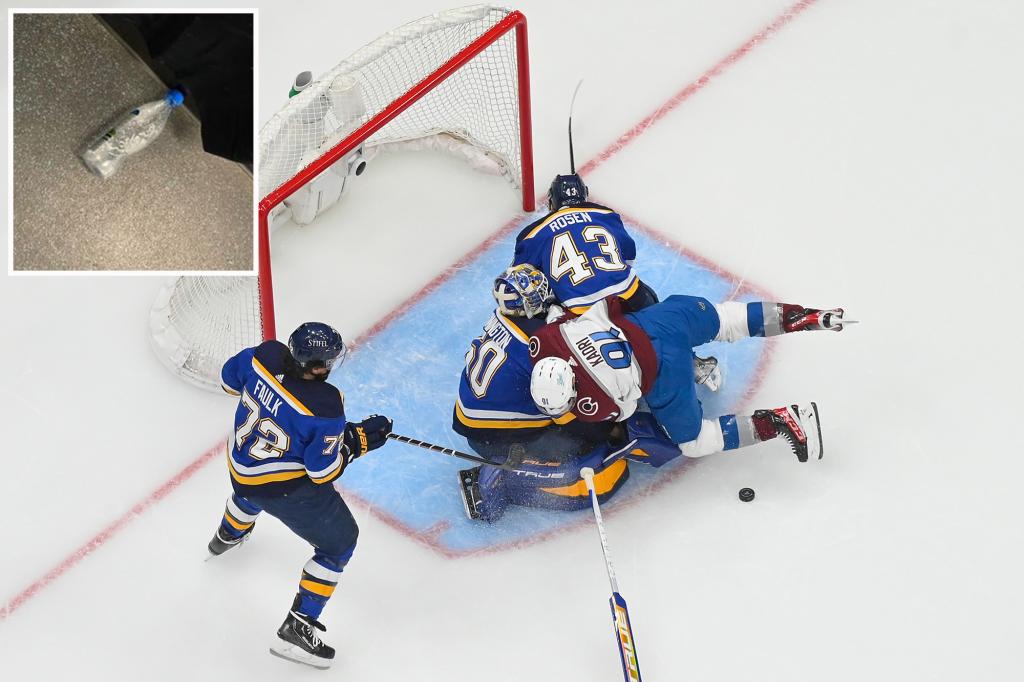 Another controversial play involving the Avalanche’s Nazem Kadri could force Blues goalie Jordan Binnington to miss the rest of the second-round series between the two teams.

And Binnington apparently is holding Kadri responsible as he reportedly threw a water bottle at Kadri as the forward conducted a postgame interview on TNT.

Binnington left Saturday’s Game 3 less than seven minutes into the first period after Kadri bowled Binnington over while battling Blues defenseman Calle Rosen for a loose puck just in front of the crease. Binnington never returned as the Avalanche won 5-2 to take a 2-1 series lead. According to The Athletic, Binnington has a knee sprain that could sideline him for “multiple weeks.”

Kadri, 34, was suspended eight games in last year’s first-round series against the Blues for an illegal check to Justin Faulk’s head. While with the Maple Leafs, Kadri was suspended during the first round of both the 2018 and 2019 postseasons.

“Look at Kadri’s reputation. That’s all I got to say,” Blues coach Craig Berube told reporters after Saturday’s game.

Avalanche coach Jared Bednar said Kadri’s reputation “doesn’t mean anything” and that it was “a legal play.”

Binnington, who led the Blues to the franchise’s first Stanley Cup three years ago as a rookie, wasn’t St. Louis’ starter when the playoffs began, but he took the job back from Ville Husso in Game 4 of the first round, earning his first playoff win since the Cup-clinching victory in 2019.

While Kadri was discussing the play on the TNT postgame show he paused at one point and did a double-take to his left. “Not sure if he just threw a water bottle at me or not,” Kadri said of Binnington. Later during his press conference, Kadri reiterated that he thought Binnington threw the bottle at him, and The Athletic reported it was in fact Binnington.

Kadri blamed his collision with Binnington on Rosen.

“I just see a loose puck,” he said. “I was kind of just sitting behind him and just tried to poke it with my stick. And I think their defenseman kind of collided with me and pushed me into him. So, you know, had that not been the case, I don’t think I would have hit him at all. It’s a loose puck. I’m just trying to bang it in.”

The Blues will try to even the series Monday night in Game 4.