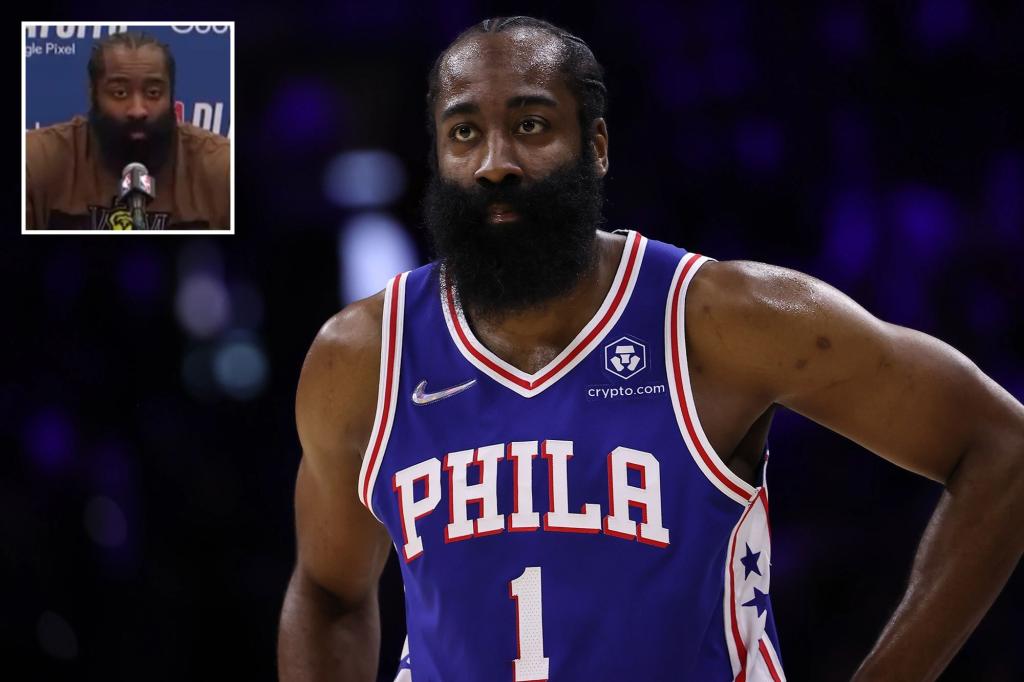 James Harden was nowhere to be found in Thursday’s Philadelphia flop.

The Sixers point guard—who was traded to Philadelphia at the deadline in February to help Joel Embiid in pursuit of a deep playoff push—was 4-of-9 with 11 points in 42 minutes of action.

Harden took just two shots in the second half of Philadelphia’s 99-90 Game 6 elimination loss to Miami. He took a shot each in the third and four quarters.

His final performance of his first season with the Sixers likely doesn’t warrant a contract extension — but there are options.

If he opts out of his current contract, Harden will become a free agent this summer — and could potentially get a supermax contract worth up to $250 million over five years.

When asked whether he plans on opting in for another year with the 76ers, Harden said, “I’ll be here. Whatever allows this team to continue to grow, get better and do the things necessary to compete at the highest level.”

Harden didn’t have much of an explanation when asked about what the Heat did to limit him in Game 6.

“Nothing,” he said. “Nothing. We ran our offense. I felt like the ball moved and it just didn’t get back to me.”

The Sixers acquired Harden from the Nets in a blockbuster trade at the deadline in February, which swapped Harden for Ben Simmons. The former league MVP was the hopeful cure to the Sixers’ shooting struggles that was spearheaded by Simmons.

Harden, who was a scoring savant during his Rockets tenure, vanished when the Sixers needed him most as the No. 2 scoring option behind Embiid — who had 20 points and 12 rebounds while playing through multiple injuries.

After the Game 6 loss, Embiid said the Houston Harden fans once knew is a thing of the past.

“Since we got him, everybody expected the Houston James Harden,” Embiid said. “But that’s not who he is anymore. He’s more of a playmaker. I thought, at times, he could have been, as all of us could have been, more aggressive. All of us whether it was Tyrese [Maxey] Gold Tobias [Harris] or guys coming off the bench.

Harden’s second half performance in Game 6, or lack thereof, drew the ire of ESPN personality Stephen A. Smith.

“That performance by James Harden requires an investigation,” the “First Take” host said after the game. “How in God’s name you go 22 minutes in the second half and attempt one shot. It was a horrible performance. Anemic and impotent performance by James Harden. And I’m really interested in seeing what the Philadelphia 76ers are going to do with [coach] Doc Rivers because I smell something and it don’t smell right at all.”

Rivers, though, did not place blame on Harden after the Sixers were sent home from the playoffs.

“I’m not gonna make this a referendum on James, OK?” Rivers said. “We just could’ve played better. The ball could’ve moved more. Did we have enough time to get our stuff in? I thought we did, honestly. I thought we really did, but clearly, we didn’t.”