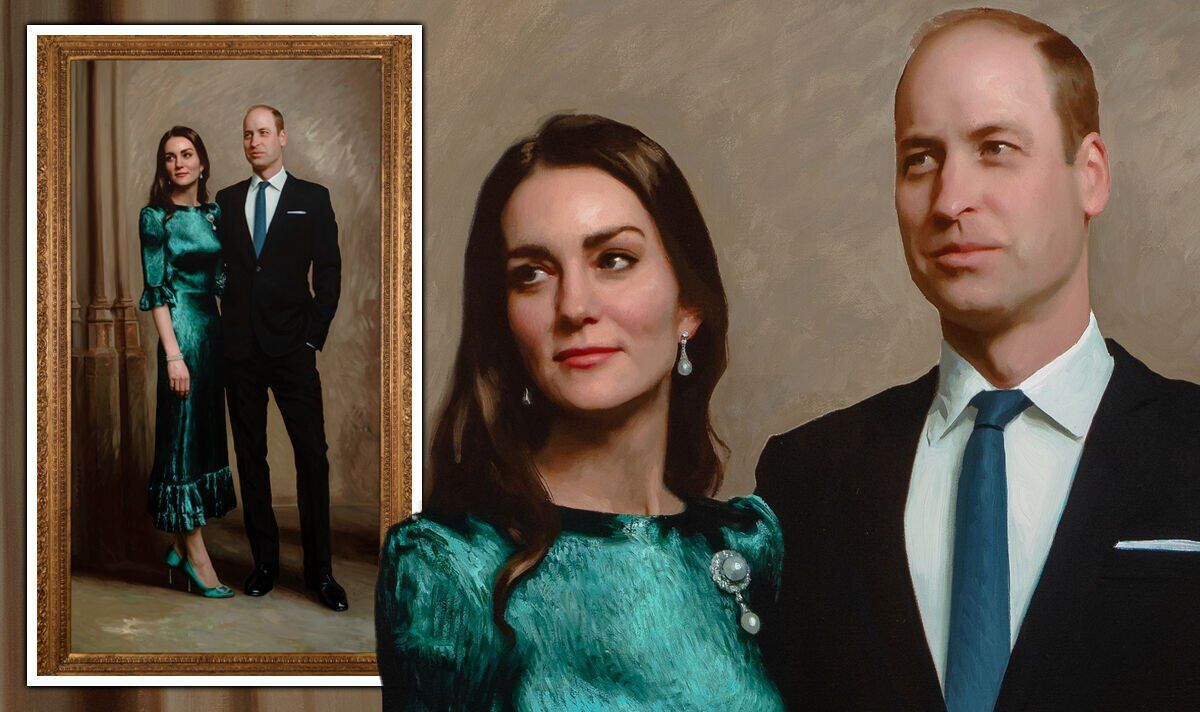 The stunning painting was shared as the royal couple viewed it in person at the Fitzwilliam Museum in Cambridge. The future King and Queen Consort are standing side-by-side with an arm around each other in the portrait by artist Jamie Coreth.

Kate looks elegant in an emerald green dress, while William is smart in a black suit and blue tie.

The Duchess’s brunette hair is loose around her shoulders and she accessorizes with dangly earrings, a brooch and bracelet.

William has one hand in his pocket as he and Kate look to their right as they pose for the painting.

The portrait was commissioned last year as a gift for the people of Cambridgeshire.

Award-winning British artist Mr Coreth said it was the “most extraordinary privilege of my life to be chosen to paint this picture”.

He added: “I wanted to show Their Royal Highnesses in a manner where they appeared both relaxed and approachable, as well as elegant and dignified.

“As it is the first portrait to depict them together, and specifically during their time as the Duke and Duchess of Cambridge, I wanted the image to evoke a feeling of balance between their public and private lives.

“The piece was commissioned as a gift for the people of Cambridgeshire, and I hope they will enjoy it as much as I have enjoyed creating it.”

Members of the public will be able to view the portrait at the Fitzwilliam Museum for an initial period of three years.

It will then be exhibited in other community spaces and galleries around the county.

The painting will also be loaned to the National Portrait Gallery, of which Kate is patron, for a short period to mark its reopening in 2023.

Luke Syson, director of Cambridge University’s Fitzwilliam Museum, said: “It’s incredibly exciting to be the first to be able to show the only double portrait of the Duke and Duchess of Cambridge so far to have been painted, and commemorating of course their connection with Cambridge through their titles.

“It’s a great moment for the Fitzwilliams.”

It has been released just days after William, who is second in line to the throne, marked his milestone 40th birthday.

In the coming decade, the future King’s role will become more prominent as he supports the monarchy.

William puts Kate at the University of St Andrews when they were both students.

They both studied history of art although William later switched to geography.

The pair tied the knot in a spectacular ceremony in 2011 after dating for more than eight years.

He was made the Duke of Cambridge by his grandmother, the Queen, on the morning of his wedding.

The couple welcomed their first child Prince George, also a future king, in 2013, followed by Princess Charlotte in 2015 and Prince Louis in 2018.