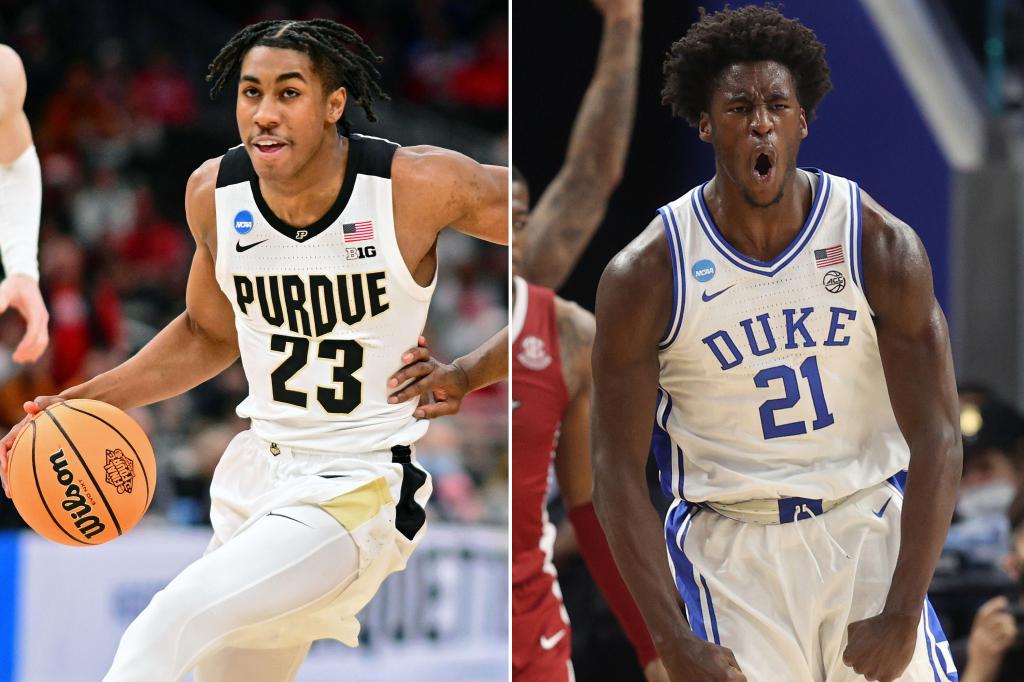 The day has finally arrived.

It’s the 2022 NBA Draft at Barclays Center. Dreams will be realized. Mistakes will be made. There will be unexpected selections, players who fall too far, outrageous outfits and heartfelt moments.

After weeks of intrigue, rumors and smokescreens, it’s time to make the picks. Before then, however, The Post’s Zach Braziller offers one last look at how he sees it all unfolding Thursday night:

This has been the pick for weeks, basically since the Magic won the draft lottery. Smith is the prototypical new-age NBA big man, a sharpshooting forward who can defend on the perimeter and in the paint, and adds to Orlando’s impressive young nucleus of talent that includes Cole Anthony, Franz Wagner and Jalen Suggs.

The most debated player in this draft, Holmgren comes with a fair amount of questions about his rail-thin frame, but he also brings tantalizing two-way talent. It’s easy to see this going in either direction. The Minnesotan can be a rim-protecting, 3-point shooting force, but he also could struggle against the strength and physical nature of the league if he is unable to put on the needed weight. An absolutely fascinating prospect who will be under the league’s microscope from Day 1.

The Rockets were sold on Banchero almost immediately, trading starting power forward Christian Wood for a late first-round pick after Banchero visited Houston. Although there are questions about his motor and defensive chops, Banchero will be an offensive weapon from the get-go, creating a potent 1-2 punch with Jalen Green, last year’s No. 2 overall pick.

After weeks of trade talk, the Kings end up keeping the pick and pass on Purdue’s Jaden Ivey, going with need over talent. Murray fits their roster far better — Sacramento already has players similar to Ivey on its roster in De’Aaron Fox and Davion Mitchell — as a shot-making big wing capable of playing multiple forward spots.

Some have compared Ivey to Russell Westbrook. Others see similarities to Ja Morant and Donovan Mitchell. The Pistons score big here, landing a terrific complement to Cade Cunningham, the No. 1 pick a year ago, who will speed up their rebuild and give them an elite backcourt for years to come.

The defensively needy Pacers, one of the worst teams at that end of the floor a year ago, land one of the best defensive players in this draft, a long guard from Australia who complements Tyrese Haliburton well. Daniels is a worker. A G-League Ignite source raved about his coachability and determination to improve as a shooter and ball-handler. “You never had to beg him to come to the gym,” the source said.

The Pac-12 Player of the Year helps Damian Lillard and the Trail Blazers now and down the road. Initially, he contributes defensively and as an explosive finisher in transition. But the Canadian has All-Star potential.

The draft’s mystery man, Sharpe is basically making the leap from high school to the NBA after enrolling at Kentucky in January, but not playing in any games. He’s exceptionally talented, a gifted shooting guard who has looked the part in agent-run workouts, but he hasn’t played competitive basketball in a full year. The Pelicans are rolling the dice. There is no way to know what you’re getting with Sharpe.

Experts see some Bam Adebayo in the one-and-done big man, an 18-year-old rim protector capable of so much more than he showed at Memphis. The Spurs, in need of frontcourt help, go for the uber-athletic Duren, eyeing him as a replacement for Jakob Poeltl.

The Wizards feel they are close to contending as long as they keep All-Star Bradley Beal, and so they take an immediate contributor in the Big Ten Player of the Year. Forget Davis’ low 3-point percentage as a sophomore — the result of his high usage rate — he’s an underrated defender and skilled shotmaker who can contribute off the bench right away.

There are similarities to Cole Anthony in the sharpshooting Griffin. He comes from NBA bloodlines, he was a huge recruit and now there are doubts after an underwhelming one year in college. But he’s a big guard who can stretch the floor and, while there are injury concerns, Griffin is one of the youngest players in the draft — he doesn’t turn 19 until late August — and has a considerably high ceiling.

The Thunder try to trade up a few spots, but as the board falls for them, they wind up with the player they wanted in the first place. The Big 12 Sixth Man of the Year fits the young roster well, adding another quality and versatile defender to Oklahoma City’s defensive-minded core.

A perfect fit for the on-the-rise Hornets, who fill a major void for a rim-protecting, lob-catching finisher to go with LaMelo Ball. The Hornets are very familiar with the 20-year-old Williams and his 7-foot-8 wingspan from his time at Duke, where he developed into one of the best big men in the country as a sophomore.

Williams caps off his rags-to-riches story by playing his way into the end of the lottery. The rangy wing with a 7-2 wingspan becomes Santa Clara’s first draft pick since Steve Nash in 1996, parlaying a breakout performance at the draft combines into this unlikely rise. He will be worth it for the Cavaliers, who get themselves a stout 3-and-D prospect capable of developing into even more.

After getting Ball his new lob partner, the Hornets find him a court-spacer in Branham. Efficient offensively, the former Ohio State star is a knockdown shooter who has the tools to become a strong defender and gives the creative Ball even more room to operate.

Experience and maturity are undervalued in the NBA these days, looked down upon compared to upside and potential. That’s why Agbaji falls out of the lottery — he’s already 22. But he can step in right away and produce at both ends of the floor for the Hawks, as a shotmaking wing and representative defender. He improves Atlanta’s bench, while other teams have to wait years for a return on their first-round investments.

Neither Banchero or Green are known for their defense, and so the Rockets find them a grinder to complement their offensive gifts in the defense-first wing. He’ll bring the lunch pail and defend the league’s many gifted perimeter scorers.

This may be described as a reach by some, but this is what smart organizations do — find winners who produce at both ends of the floor and have improved throughout college as Liddell did at Ohio State. Age can be overrated. As one scout said, “Get me a guy who impacts winning.” Liddell does that.

His defense alone makes sense for the Timberwolves, who get elite rim protection with Kessler. At Auburn last year, he blocked an astounding 4.6 shots per game in 25.6 minutes, and can help improve a major Minnesota weakness in the paint.

With three first-round picks, the Spurs can afford to take a big swing on a project like Dieng. There is major upside in the lanky forward prospect who did get better as his season in the Australian NBL progressed. But patience—and extended time in the weight room—are needed.

Teams with picks from the back end of the lottery into the early part of the second round brought Beauchamp in for workouts, giving the athletic freak of a wing a wide range of possibilities. He’s not a 3-and-D prospect at the moment — his shot needs work — but his energy, defensive versatility and explosiveness at the rim are qualities that teams covet.

Tyus Jones’ potential departure through free agency creates a hole at point guard, one that Washington is capable of filling. The Kentucky point guard likely would’ve gone higher had he played on the ball all year in Lexington and didn’t battle a late-season left ankle injury. Still, he shot 35 percent from 3-point range and produced a better than two-to-one assist-to-turnover ratio, proving his potential in a small sample size.

The SEC leader in steals has blazing speed and an elite handle to go with an impressive midrange game. His size (6-foot) is a detriment, but his burst could make up for that, and the 76ers are in need of a playmaking guard behind Tyrese Maxey and James Harden.

Contenders like the Bucks can always use athletic wing defenders with offensive upside like Terry. At Arizona, he was a glue guy, a strong playmaker considering he played off the ball, an efficient scorer who did a lot of dirty work and a stout defender. At the outset, he’s an energy guy, but there is shotmaking potential that can be developed.

In each of his three seasons at Duke, Moore improved, his numbers rising across the board. Most importantly, his 3-point percentage increased to 40.1 this past season, as he evolved into a complete player capable of not only scoring at a high level, but distributing and defending. The high-IQ prospect has Spurs written all over him.

Shotmakers with size will always have a home in the modern NBA, and the 6-9 LaRavia possesses both. He made 38.9 percent from beyond the arc last year in the ACC, and his 3.7 assists show a ball-mover capable of creating for teammates.

The jump shot kept the former Notre Dame star out of the top 20. But there is so much else to like about him, from his speed with the ball in his hands to defensive potential and frequency of penetrating the paint.

The defending champions can gamble on Hardy’s talent considering the robust nature of their roster, betting they can get the most out of the skilled guard who was once considered a top-five pick before his down year with G League Ignite.

Without an obvious need, the Grizzlies opt for potential with the high-upside 19-year-old forward from England who has strong perimeter skills for his size (6-11).

The rim-running, shot-blocker checks a lot of boxes for the Nuggets, who have been looking for Nikola Jokic’s backup for quite some time. His elite leaping ability and defensive prowess — 2.8 blocks per game last year — should at the bare minimum enable Koloko to impact the game at the rim.