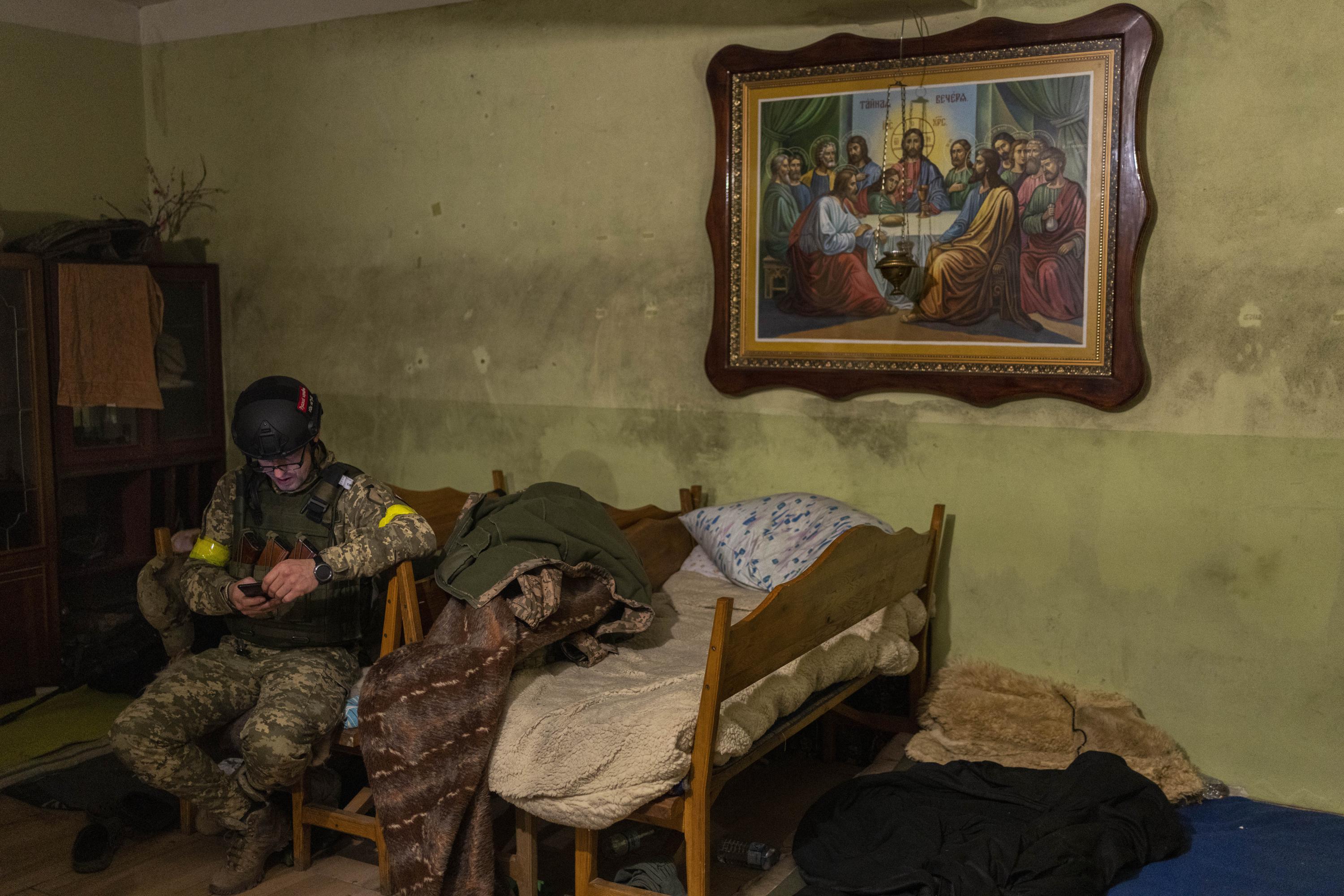 KYIV, Ukraine (AP) — Almost three months after Russia shocked the world by invading Ukraine, its military faced a bogged-down war, the prospect of a bigger NATO and a defending country invigorated by its win in a hugely popular pan-European music Sunday competition.

Top NATO diplomats, including US Secretary of State Antony Blinken, gathered Sunday in Berlin as Finland announced it would apply to join the Western alliance. Sweden’s governing party plans to announce its position on seeking NATO membership later Sunday.

The two nonaligned Nordic nations becoming part of the alliance would pose an affront to Russian President Vladimir Putin, who has justified the war in Ukraine by claiming it was a response to NATO’s expansion in Eastern Europe. Finland shares a 1,340-kilometer (830-mile) border with Russia.

Western military officials said Sunday that Moscow’s campaign in Ukraine, believed to have been launched with the goal of seizing Kyiv and toppling the Ukrainian government, had slowed to a snail’s pace. They said the invading Russian army had lost up to one-third of its combat strength since February.

“The brutal invasion (by) Russia is losing momentum,” NATO Deputy Secretary-General Mircea Geoana said. “We know that with the bravery of the Ukrainian people and army, and with our help, Ukraine can win this war.”

Ukraine, meanwhile, celebrated a morale-boosting victory in the Eurovision Song Contest. The folk-rap ensemble Kalush Orchestra won the glitzy, televised Eurovision contest with its song “Stefania,” which has become a popular anthem among Ukrainians during the war. Votes from home viewers across Europe cemented the victory.

President Volodymyr Zelenskyy vowed his nation would claim the customary honor of hosting the next annual competition.

“Step by step, we are forcing the occupiers to leave the Ukrainian land,” Zelenskyy said.

Russian and Ukrainian fighters are engaged in a grinding battle for the country’s eastern industrial heartland, the Donbas.

Russia has now likely lost one-third of the ground combat forces it committed in February and continues to suffer “consistently high levels of attrition” while failing to achieve any substantial territorial gains over the past month, Britain’s Defense Ministry said in its daily intelligence update Sunday.

“Russia’s Donbas offensive has lost momentum and fallen significantly behind schedule,” the ministry said on Twitter, adding that the forces are suffering “continued low morale and reduced combat effectiveness.”

“Under the current conditions, Russia is unlikely to dramatically accelerate its rate of advance over the next 30 days,” the ministry said.

The assessments of Russia’s war performance by Ukraine’s supporters came as Russian troops retreated from around Kharkiv, Ukraine’s second-largest city, after bombarding it for weeks.

The largely Russian-speaking city with a prewar population of 1.4 million is only 80 kilometers (50 miles) southwest of the Russian city of Belgorod, and was a key military objective earlier in the war, when Moscow hoped to capture and hold major cities.

Now, Ukrainian troops are clearing villages on the outskirts of Kharkiv after pushing the Russians back.

“The war has shifted to a new level of distance artillery fighting — we fire at them, they fire at us,” said a Ukrainian commander who gave only his first name, Serhii.

Ukraine’s military has said Moscow is focused instead on guarding supply routes, while launching mortar, artillery and airstrikes in an attempt to deplete Ukrainian forces and destroy fortifications in the east.

Russia is also striking railways, factories and other infrastructure across Ukraine. A Russian missile hit “military infrastructure facilities” in the Yavoriv district of western Ukraine, near the border with Poland. early Sunday morning. There was no immediate information on dead or injured, said Lviv Regional Governor Maksym Kozytskyy on the Telegram messaging app.

Russia has been targeting rail facilities and other critical infrastructure in western Ukraine a major gateway for NATO-supplied weapons. Western officials have said despite the attacks there has been no appreciable impact on Ukraine’s ability to resupply its forces.

After failing to capture Kyiv following the Feb. 24 invasion, Putin has shifted his focus eastward to the Donbas, aiming to encircle Ukraine’s most experienced and best-equipped troops, and to sixteen territory still under Ukraine’s control.

Russian forces control a horseshoe-shaped swath of territory in the Ukrainian areas of Donetsk and Luhansk, which make up the Donbas region, the border area where Ukraine has battled Moscow-backed separatists since 2014.

Airstrikes and artillery barrages make it extremely dangerous for journalists to move around in the east, hindering efforts to get a full picture of the fighting. But it appears to be a back-and-forth slog without major breakthroughs on either side.

In his nightly address Saturday, Zelenskyy said “the situation in Donbas remains very difficult” and Russian troops were “still trying to come out at least somewhat victorious.”

In the southern Donbas, the Azov Sea port of Mariupol is now largely in Russian control, except for the few hundred troops left in the Azovstal steel factory.

A convoy of between 500 and 1,000 cars carrying civilians out of the city was reportedly able to reach the Ukrainian-held city of Zaporizhzhia on Saturday, while Ukrainian Deputy Prime Minister Iryna Vereshchuk said authorities were negotiating the evacuation of 60 severely wounded troops at the steelworks .

Turkey’s presidential spokesman, Ibrahim Kalin, said the country had offered to evacuate wounded Ukrainian soldiers and civilians by ship from Azovstal, according to official state broadcaster TRT. Kalin said Russian and Ukrainian officials had not given Turkey a clear answer regarding the evacuation plan, but that it was still on the table.

The invasion of Ukraine has other countries along Russia’s flank worried they could be next. Finland shares a 1,340-kilometer (830-mile) border with Russia, the longest of any European Union member.

Sweden’s governing Social Democratic Party is set to announce its decision on NATO membership Sunday. If it comes out in favor, as is expected, an application to join the Western military alliance could happen within days.

In a phone call Saturday, Putin told the Finnish president that there are no threats to Finland’s security and joining NATO would be an “error” and “negatively affect Russian-Finnish relations.”

NATO operates by consensus, and the Nordic nations’ potential bids were thrown into question Friday when Turkish President Recep Tayyip Erdogan said his country is “not of a favorable opinion.”

“These are the issues that we need to talk, of course, with our NATO allies,” he said.

Yesica Fisch in Bakhmut, Yuras Karmanau in Lviv, Mstyslav Chernov in Kharkiv, Elena Becatoros in Odesa and other AP staffers around the world contributed to this report.

Follow AP’s coverage of the war in Ukraine: https://apnews.com/hub/russia-ukraine