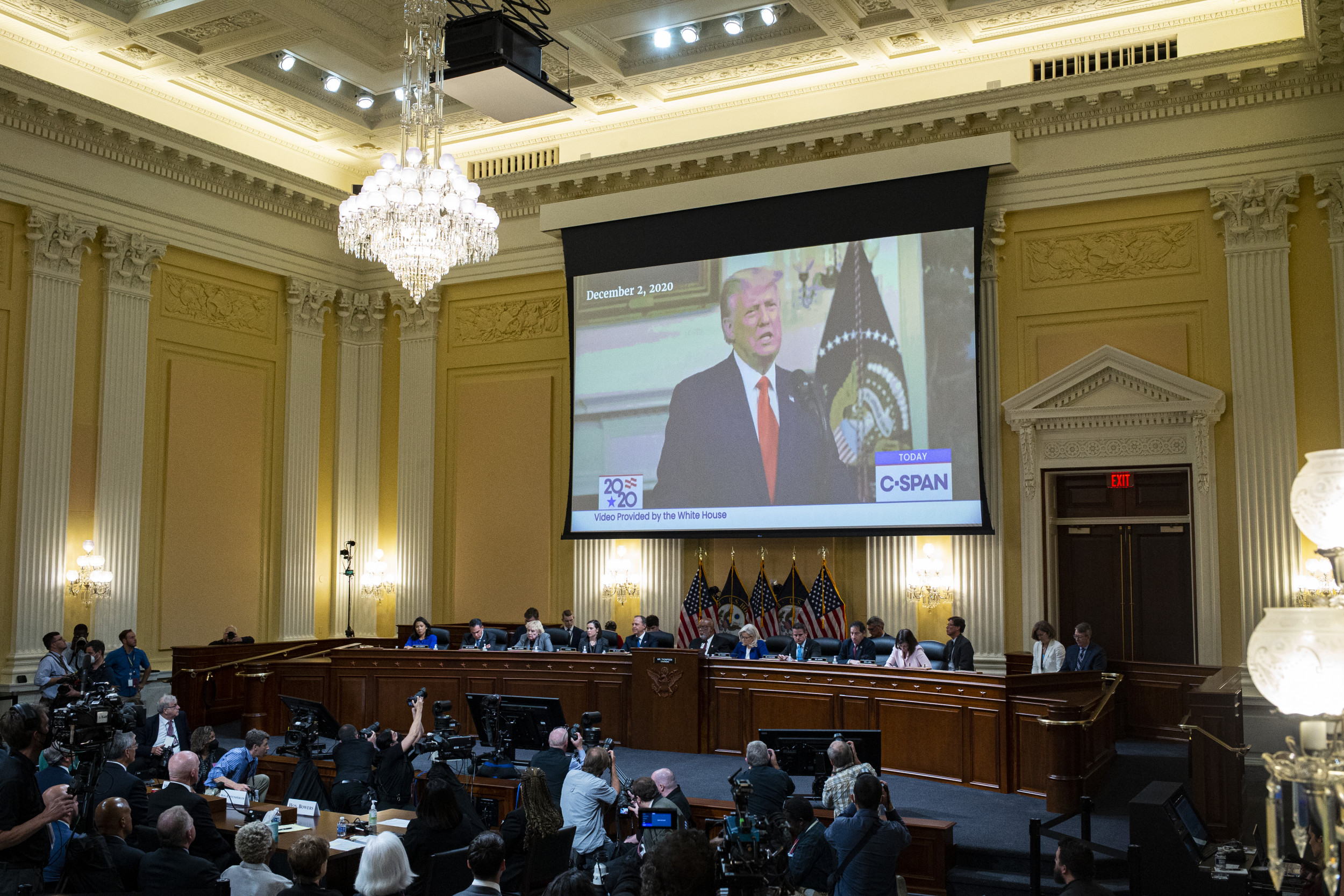 Former President Donald Trump fired off angry posts on his social media platform as the House January 6 committee turned its sights on the former president’s efforts to use the Justice Department to subvert the 2020 election.

Trump took to his Truth Social network on Thursday to continue rehashing repeatedly debunked claims of widespread election fraud as the nationally broadcast hearing unfolded. The committee heard from three high-ranking Justice Department officials who described resisting the former president’s pressure to use the department’s authority to challenge the election results.

Assembled last year to look into the causes of the January 6, 2021, insurrection at the US Capitol, the probe has turned its attention to how Trump and members of his inner circle sought to prevent Congress from certifying the 2020 presidential election results.

The committee earlier this month held its first nationally broadcast hearing laying out its findings.

Representative Adam Kinzinger, a Republican from Illinois, led Thursday’s fifth televised hearing, saying in his opening remarks that Trump improperly pressured the Justice Department’s leadership to “say the election was ‘corrupt,’ and, ‘leave the rest to me and the Republican congressman .'”

“As you will hear today, the department’s top leadership refused,” Kinzinger said. “Not surprisingly, President Trump didn’t take no for an answer.”

Trump appeared to take a swipe at Kinzinger, one of two Republicans on the committee.

“Has there ever been a time in Congress where a Member is allowed, without any cross examination of any kind, to read lengthy and often untruthful statements, not from notes or other papers, BUT FROM A TELEPROMPTER?” Trump said in a Truth Social post. “This is a Kangaroo Court the likes of which we have never seen in this Country!”

Cross examination is a procedure to question witnesses in a civil or criminal trial.

After the 2020 presidential election, former Trump Attorney General Bill Barr earlier told the committee he dismissed the then-president’s insistence of vote fraud as “bulls**t” and resigned from the position.

Former acting Attorney General Jeffrey Rosen, who succeeded Barr, recalled to the committee how Trump was “dissatisfied” the Justice Department hadn’t done enough to back his claims of vote fraud.

Rosen also said in his testimony that Trump wanted the Justice Department to sixteen voting machines from state governments, believing they contained evidence of fraud. However, Rosen said the department didn’t have the legal authority to do so and the department saw “nothing improper” with the machines.

Meanwhile, Trump disparaged the committee as “Unselects,” riffing of its official designation as a House select committee, saying they were ignoring evidence of vote fraud.

“They refuse to go there, they want it all CANCELED, because it would be IMPOSSIBLE for the Unselect Committee to refute or challenge that which would be put before them, or the American Public,” said Trump.

Trump challenged the committee to “LET US PUT ON THE EVIDENCE, STATE BY STATE.” He also repeated his claim of “massive bundle stuffing.”

Trump’s claims of voter fraud have been struck down by over 50 courts, including the Supreme Court, and disproven by multiple audits and members of his own administration.