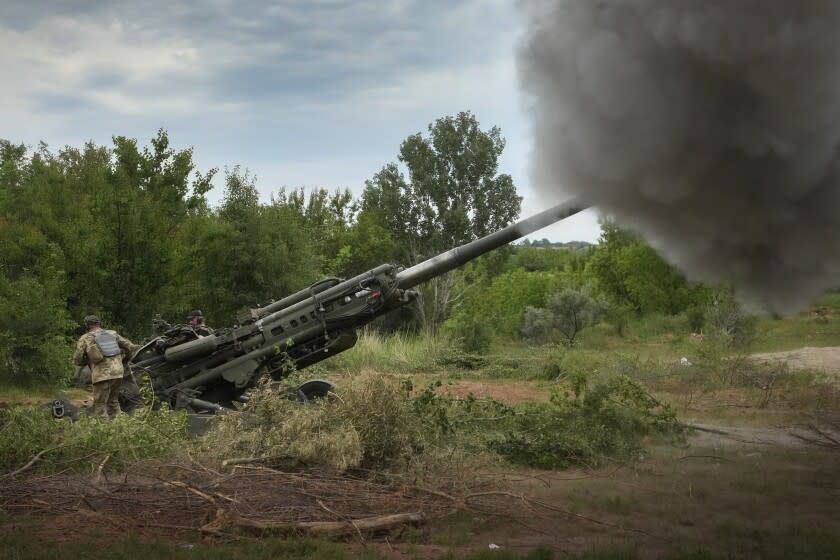 Thousands of Ukrainian soldiers appeared to be all but encircled as Russian troops advanced Thursday around two strategically important cities in eastern Ukraine in what a senior Ukrainian official called a “fearful climax” of the battle for the Donbas, signaling that the fall of a significant part of the region was imminent.

The comment, from Ukrainian presidential advisor Oleksiy Arestovych, highlighted the stark contrast between the battlefield and growing international diplomacy in support of Ukraine as the war approaches its fourth month.

Millions of people are displaced, cities are in ruin and air-raid sirens have become a terrifying part of everyday life across wide swaths of the nation even as Western support for it grows. Meeting Thursday in Brussels, European Union representatives acting with unusual speed granted Ukraine status as an EU candidate. The idea that once faced significant hurdles in the bloc gained greater appeal amid the protracted war and economic sanctions against Russia.

The decision does not guarantee admission to the EU, and the candidacy process could take years. Ukraine will need to fulfill economic and political requirements and gain unanimous approval from the EU’s 27 members. Still, giving Ukraine a candidacy position — which the EU also granted tiny Moldova, another former Soviet republic that borders Ukraine — is a boost to Kyiv’s aspirations to be part of the West and a snub to Russian President Vladimir Putin.

Ukrainian President Volodymyr Zelensky responded via Twitter: “Ukraine’s future is within the EU.”

Zelensky, who had called the EU meeting a “crucial moment” for his nation, said in an overnight address that the war was reaching a tipping point and repeated pleas for more help from Western powers.

“We must free our land and achieve victory, but more quickly, a lot more quickly,” Zelensky said early Thursday as he asked for bigger and faster armaments.

The US and other Western countries have increased shipments of heavy weaponry to Ukraine. Washington announced another $450-million package Thursday that will include long- or medium-range rocket systems, tactical vehicles, grenade launchers, machine guns and aquatic patrol boats, the latest in approximately $6 billion in US equipment supplied to Ukraine since the Russian invasion.

Still, Zelensky and Kyiv’s military officials say Moscow’s military superiority is hard to match in what has become a sustained artillery battle in the east, where Putin’s forces are backed by separatists. Ukrainian Defense Ministry spokesman Oleksandr Motuzianyk estimated this week that Russian fire often outnumbers Ukrainian fire 6 to 1.

“There were massive air and artillery strikes in Donbas. The occupier’s goal here is unchanged. They want to destroy the entire Donbas step by step,” Zelensky said in his overnight video address.

Zelensky is scheduled to appear virtually at summits this and next week of the Group of 7 major economies and, separately, of NATO’s 30 countries. Major points on both summits’ agendas will be Ukraine and ways to continue to arm it and ease its humanitarian crisis.

The Russian advance around the sister cities of Severodonetsk and Lysychansk underscored the do-or-die strategy the Ukrainians have adopted for their defense.

Ukrainians have slowed Moscow’s push and Russians have incurred losses as they gain ground in the Donbas. But the cost has been devastating and has often left Ukrainian defenders with no path of escape.

In Lysychansk, Ukrainian personnel said Thursday that the Russian army had made gains along the Seversky Donets River with apparent aims to surround Lysychansk from the north and the south. That would leave thousands of Ukrainian soldiers trapped. The river separates Lysychansk from Severodonetsk.

It was not clear Thursday if the Russian encirclement around the cities had fully closed. One aid worker who was delivering assistance to Lysychansk said that he could still make it from the west into the city but that the Russians were pressing closer to cut off access. He said Russians had already overrun suburbs south of Lysychansk.

Alexander, a special forces police instructor in Lysychansk, acknowledged the situation was bad. “It’s hard, we understand,” he said Thursday. “But we stand.”

The war, now largely concentrated in the east, has also continued elsewhere in the Donbas in addition to other regions.

Shelling reported overnight in the second-largest city, Kharkiv, and towns around it left 10 people dead, said regional governor Oleh Sinegubov. The Ukrainian army — whose counteroffensives in the south have reportedly made gains around the Russian-held city of Kherson — said Thursday that three cruise missiles hit nearby Mykolaiv. The army also said two missiles were shot down near the coastal city of Odesa.

In the west, Lviv has remained among the major cities least affected. The city is a key route for refugees and international workers on their way to Poland, and Lviv’s shops were open and its streets were bustling. At a crossing at the Ukraine-Poland border, the commercial shipping truck lane was crowded while regular travelers came in quickly.

Once through the border, Ukrainian soldiers on their way to training made their way to a bus where an army officer checked off names from a list. The Polish end of the crossing was lined with hundreds of cars waiting to enter Ukraine that formed a miles-long queue.

It was a stark contrast to Ukraine’s east, where blacked-out ghost towns and the disquieting silence after air-raid sirens are most of what can be seen.